Over the last few years, wholesale prices for natural gas and electricity have been historically low from both a price and volatility standpoint. This has been especially true for the Chicago markets when compared to other points in the Eastern half of the country. It is well known that one of the primary drivers of this phenomenon has been the proliferation of low cost natural gas resulting from horizontal fracturing in the Marcellus and Utica shales in Ohio, West Virginia and Pennsylvania. While this has had a dampening impact on prices and volatility for several years, in the last 2 years the impact has become even more pronounced with the development of the Rover Pipeline. 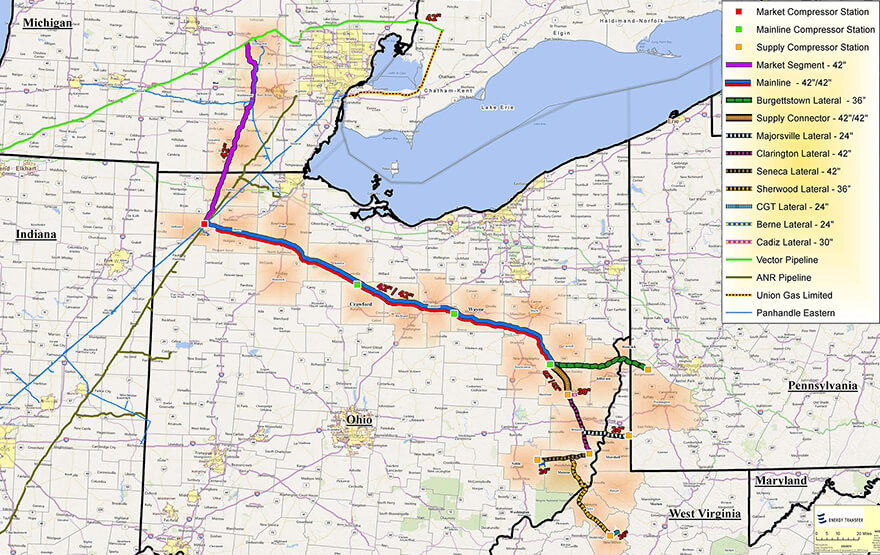 Rover Pipeline (see Illustration 1) is a 713-Mile pipeline majority-owned by Energy Transfer Partners. It is designed to transport 3.25 Billion cubic feet (BCF) per day of natural gas produced in the Marcellus and Utica shale production areas to markets west and into Canada. 68% of the capacity of the pipeline is scheduled to be delivered to the Midwest Gas hub in Defiance, Ohio with the other 32% of the natural gas to be delivered to Michigan where it connects to the Vector Pipeline that can deliver the gas directly into the Chicago market. This most certainly is beneficial to the Chicago natural gas market since it historically has been a constrained market on very cold days in the winter.

The Rover Pipeline project was announced in June 2014. The project has seen delays and has been implemented in stages but it should be fully operational by the end of the 2nd quarter of this year. Prior to the pipeline announcement in 2014, 12-month prices for Chicago City Gate were generally higher than the 12-month price in Henry Hub (benchmark with most liquidity). The relationship between any price point and the liquidity hub is referred to as basis. In the years since the pipeline announcement, this Chicago City Gate-Henry Hub basis has become increasingly negative as Chicago City Gate prices are now approximately 28 cents per MMBtu below Henry Hub for 12, 24 and 36-month forwards. As chart 1 indicates, this has not happened all at once and is currently at the lowest levels sense the announcement. It is important to note that when the current 12-month basis price is broken down by individual months (chart 2), there is less of a discount for the winter months. This makes sense when one looks at the historical basis since January 2011. In chart 3 we see that as recently as February, the Chicago basis can still trade at a strong premium given the right conditions.

So, what does this mean for energy consumers? Chicago based natural gas consumers should be looking to lock in 50-75% of their projected natural gas consumption since both absolute natural gas prices and the basis are at such attractive levels. For power consumers, the addition of cheap natural gas has been helpful and has kept electricity prices low. However, the Rover Pipeline for all intense and purposes is almost fully operational and it may become a case of sell the rumor and buy the fact. We continue to counsel customers to look at further dated contracts to achieve price certainty at very good price levels.