A new report from REN21, the renewable energy policy network, shows that 2015 saw the highest level of global investment in renewables to date, at $286bn. The greatest investment levels were seen in China, the US, Japan and India.

147 GW of renewable power was added worldwide, taking the total capacity to 1,849 GW. As can be seen in the chart below, hydro-power made up the greatest proportion of this capacity, followed by wind. Across Europe, renewables made up 44% of generating capacity and 77% of new investment.  In Scotland, renewables supplied more than 50% of electricity demand. 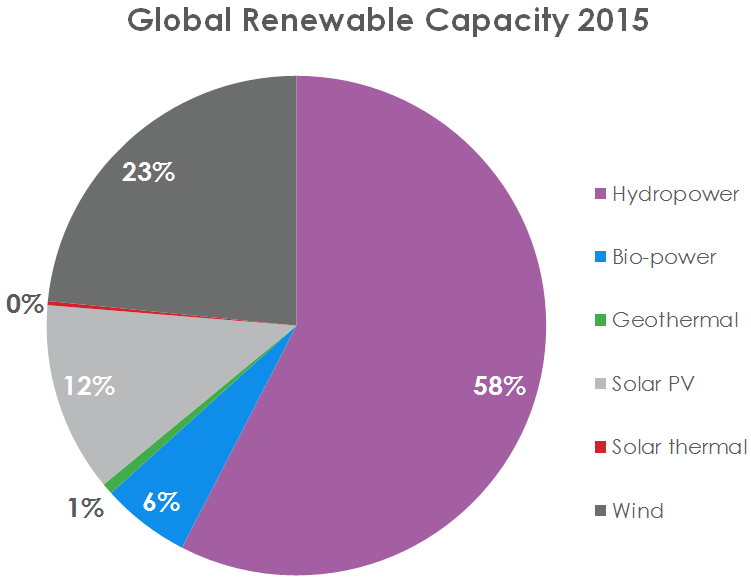 Renewables investment outpaced fossil fuels for the sixth consecutive year as the unit cost of wind and solar PV declined. The fact that this growth occurred at a time of low oil prices demonstrates that renewables are becoming more competitive with fossil fuels.

The report, entitled The Renewables Global Status Report, found that wind and solar power made up 77% of new installations and that at the end of 2015 renewables could provide 23.7% of global electricity. The greatest proportion of this was from hydro power at 16.6%, followed by wind at 3.7%. 63GW of wind capacity was added globally, the majority of new installations being located in non-OECD countries, with China leading the way. The solar PV market grew by a record 50 GW, lifting the global total to 227 GW.

It was reported that 8 million people, worldwide, held jobs related to the renewables industry in 2015. In Germany 355,000 people worked in the industry, which equated to 55% of all EU jobs related to that sector.

The UK was placed fourth for its investment in renewables in 2015, with the top three places being taken by China, the United States and Japan. This may sound surprising given the cuts made to UK green subsidies in 2015, but these are likely to have the greatest impact on investment post-2015. A recent report published by Ernst & Young which ranked countries’ attractiveness for renewables investment, downgraded the UK to 13th place as the result of changes made to its policy landscape last year.

Worldwide, the heat and transport sectors did not see the same level of investment as renewable power, largely as the result of both low oil prices and a lack of policy commitments.  Only 8% of heating and cooling was supplied by renewable energy worldwide and 4% of global fuel for road transport. While there is evidence of progress in both these sectors, REN21’s guidance to policymakers is to think beyond the power sector by providing policy support. It also recommends the removal of barriers to uptake such as the lack of trained personnel and consumers’ reluctance to change.

Another area of focus was the important issue of distributed renewable energy (DRE). Approximately 17% of the global population live without electricity and DRE systems such as offgrid solar lighting and micro-Hydro systems play an increasing role in providing energy to these populations. The largest market for off-grid solar products last year was Sub-Saharan Africa where 1.37 million units were sold.

The end of 2015 saw the signing of the Paris Climate Agreement ahead of which countries made commitments to renewables targets and energy efficiency which indicates a positive direction for a continuing global transition to a low-carbon economy. As well as summarising the renewables landscape in 2015, the REN21 report looks ahead and recommends action for policy makers including a focus on energy storage, flexible power plants, and distributed energy, as well as thinking beyond the power sector. The key findings can be found here.

Nikki joined Alfa Energy in September 2015 as a Carbon Management Consultant where she advises clients on legislation, compliance, and the implementation of carbon management schemes. She is a Practitioner member of IEMA, has a postgraduate diploma in Environmental Decision Making, and has over 15 years’ experience in energy consultancy.
View all posts