The recent Capacity Auction for delivery 2020/21 was successful for new storage solutions but less successful for new CCGT gas plants. Provisional results show that the clearing price was £22.50 kW/year for a total of 52.43 GW of de-rated capacity. The National Grid report indicates that 75% of capacity entered in the auction were awarded capacity agreements. 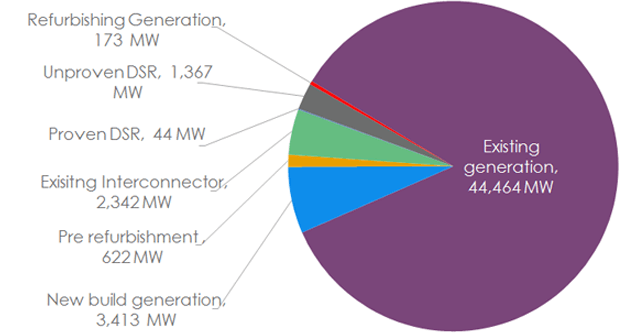 As can be seen in the chart above, 3.4 GW of new build generation was awarded capacity contracts . This included 500 MW of battery storage, a positive signal for the development of the technology in the UK, but only one new build CCGT (combined cycle gas turbine) secured a contract, with capacity of 333 MW.

Existing CCGT plants were successful at auction, achieving the greatest volume of capacity agreements by technology, at 22.5 GW. Storage won 3.2 GW of capacity overall, 23% higher than the previous auction round held in June this year.

The Capacity Market is a government tool to ensure electricity remains available at times of high demand by paying generators to make backup power available at short notice. Capacity is contracted in advance, via a market auction, to existing, refurbished, and new build generation, as well as demand side response. Capacity is bid for via a descending clock auction that matches the price to the target volume, the cost of which is passed on to consumers via their electricity bills.

At last week’s auction, 17 GW of capacity exited as the clearing price fell too low to support them, 56% of which were new CCGT plants. The government had intended to encourage investment in new gas generation, with a previously stated target of 26 GW of new gas plants by 2030, in order to provide stable baseload generation and centralised power plants. This is particularly important at a time when a large volume of thermal capacity is closing. Power output from coal now makes up just 15% of all power generated, compared to 30% in 2014. The current outlook suggests that the remaining coal-fired plants are likely to be closed by 2021.

Business and Energy Secretary Greg Clarke was positive about the results of the auction, saying: “This is about more than just keeping the lights on. A modern, reliable, and flexible electricity system powers the economy and Britain’s future success.”

Nikki joined Alfa Energy in September 2015 as a Carbon Management Consultant where she advises clients on legislation, compliance, and the implementation of carbon management schemes. She is a Practitioner member of IEMA, has a postgraduate diploma in Environmental Decision Making, and has over 15 years’ experience in energy consultancy.
View all posts